Depleted Oaks Must Search for the Heroes Inside

Right then, let’s try to do a brief preview for a weekend that has been thrown into chaos by missing players and injuries.

As must be the case, the First XI have raided the teams below them to get a balanced side out. I haven’t got the time or energy to calculate it but the last time I checked, strike bowlers Stef Kaltner and Neil Robinson were out. add to that, opening batsman, Will Cheyney, and number 3, James Bayliss and things start to look a little bare. As Basil Fawlty might say, “Otherwise, okay?”

I am not entirely sure who has been promoted except second team bowler of metronomic tedium, Dave Bowers. On merit too as Dave has had a stingy start to 2022. There will also be a lot of weight on the young but talented shoulders of Josh Carpenter who will open, possibly with Dave or 14-year-old Harry Tucknott.

The First XI are also boosted by the return of Steve Bown and the chaotically eccentric Brad Compton-Bearne. Brad lifts a bat for the first time since last summer, so it should be funny if nothing else. No one knows what will happen, least of all Brad.

Still, with Michael Wood, Mozzer and DJ batting well last week, and Nigel Bishop, Matt and Josh looking a game away from a big score, there is plenty of hope to be had. A decent start could set up the middle order to make some hay in the sunshine. Ian Bennett and Bownie both batted well in the win against RAM and AB is due a big score one day.

It will be a good test of how we can cope without key players and will be a great opportunity for the unsung heroes to shine. An intriguing game, this one.

The Two’s travel to Odiham (Long Sutton) in a buoyant mood after a rousing victory last week extended their unbeaten run to three matches. Odiham 3’s are also unbeaten and will provide a stiff test for a team slightly depleted.

Jack has lost Dave Bowers to the First XI and Rob Wood to injury, meaning Bob Lethaby and Ollie Rabley step up. This completes two father and son duos, with George Lethaby and Will Rabley also in the team. Ollie and Bob played on the same pitch last week, so they have a sense of ‘deja vu happening all over again’. If they can picket up 5 wickets between like they did last week, that would be as handy as it is unlikely.

This game will probably be nip and tuck. So, a good time for experienced players to step forward on a small pitch where 250 should be par. Too close to call a likely winner in this one but it could come down to wides and extras. It is a pitch where anything wayward often goes to the boundary without much encouragement. You have been warned lads.

Poor old Kris Tucknott has been the one battling for scraps as he attempts to get a Third XI on the pitch. Fortunately, Kris has Phil Carpenter in the ranks along with the return of Steve Savage after a heart-attack. A big welcome back Steve, go easy young man. Kris has also led from the front with some good early season form, including 70 last week.

Bowling options look a bit bare without Bob and Ollie, so much will depend on the father and daughter duo of Lee and Lucy Noble and spin kings, Ravi Kancharla and James Middleton. As well as Lucy, we also have two other debutants, with Tim Beere and a player who, at this stage, I only know as ‘Deano’s mate’, stepping forward. Perhaps Deano’s mate is Michael Vaughan? It’s 2022 remember, so expect the unexpected. Whatever the case, please ensure new players are made welcome.

So that’s it. That’s where we are this week. It’s been hard for the captains to find balanced teams, so please don’t slag them off until after the games have finished. Can we somehow come away with three wins? A chairman of lesser imagination than I, would now resort to a cheesy song to inspire you.

However, that’s not me, because sometimes the river flows but nothing breathes, a train arrives but never leaves, it’s a shame, life like love that’s walked out of the door, of being rich or being poor, such a shame. But it’s then, then that faith arrives, to make your feelings alive, and that’s why, you should keep on aiming high, just seek yourselves and you will shine, you’ve got to search for the heroes inside yourselves.

Off you go my Merry men (and Lucy). Travel forth on that Oakley bus and come back in time to celebrate a Liverpool victory with a Deano and Woody BBQ and a few cold beers. 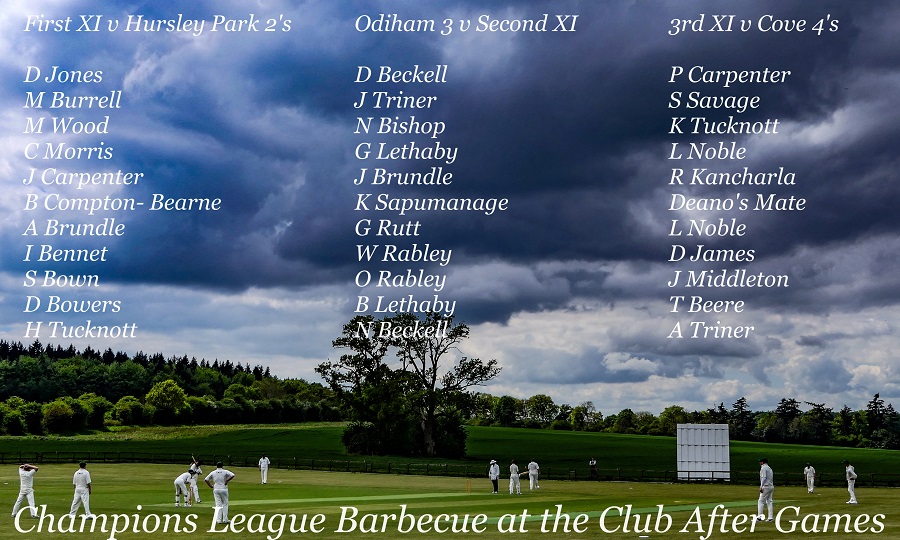