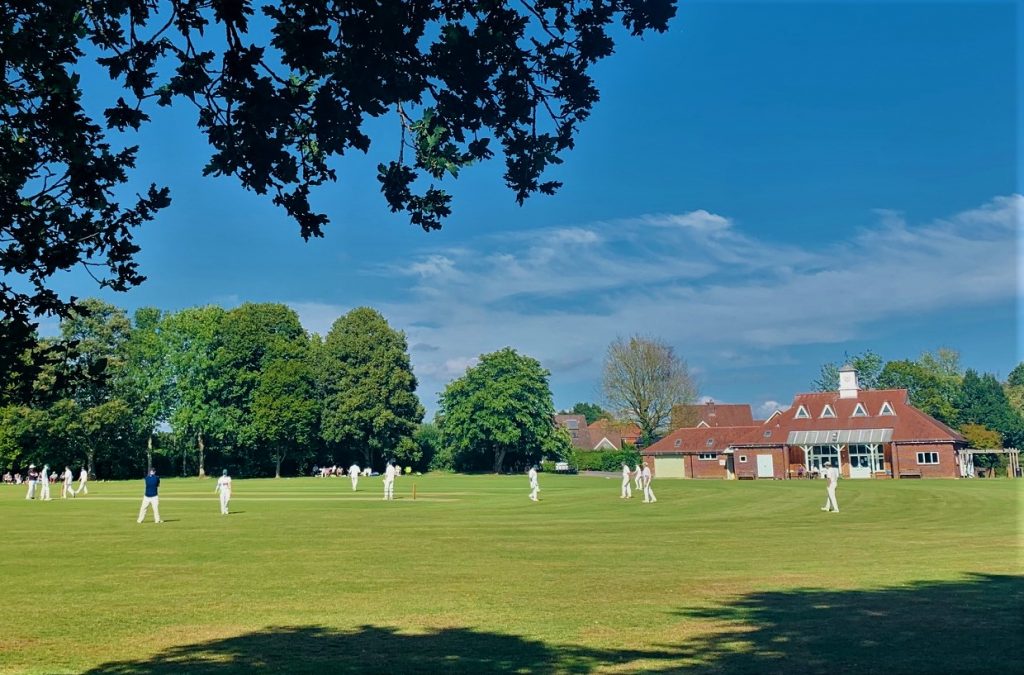 The Third XI had a roller coaster start to a delayed season at a sunny and warm Ropley, yesterday.

Dan lost the toss, The Oaks were asked to bowl, and the injured Ollie was asked to dog sit for Marley, who promptly delivered him a steaming Richard the Third.

The Ropley openers were wise old foxes, obdurate and measured as they waited and dispatched bad balls. Dave Bowers, who was bowling well, was unlucky not to get one of the openers with what seemed a hefty edge and the scoreboard ticked along.

However, the batsman then got on the wrong end of a dubious LBW, courtesy of Noah Beckell. The Rops number three looked like a proper batsman and soon started punishing poor bowling. However, just as he got going, the excellent Taner McEwan removed him, as well as the other opener.

If the Oaks thought they were now on the top of their game, they were sadly mistaken. Two Hampshire girls’ players came to the crease and played some fine strokes to put the bowlers to the sword.

Dan Beckell, probably the greatest captain the Third XI has had, then bought on veterans, Phil ‘Chippy’ Carpenter and Bob ‘The Oakley Express’, to calm down the run rate. It worked, with both taking the wickets of the girls, one who looked certain for a ton. Tom Harris took both catches.

Bob also completed a run out, not panicking at all as the ball fell from his hands onto the stumps. He thought about trying to say he did it on purpose, but the lie would have been a prosperous one. Noah finished his spell with a late wicket and Ropley ended on 195.

Chasing the target, The Oaks got off to a speedy start with both Dan Beckell and Tom Harris looking good, at least until Tom was dismissed by a leg side vomit inducer. Chippy Carpenter came to the crease and looked unflappable, even after seeing Dan Beckell dismissed LBW. Dan has never been out LBW and today was no exception.

This brought youngster, Will Rabley, to the crease. Will has got bigger than his elder brother over the last year and it showed in his batting. He smashed some lovely blows as Phil was happy to hold up the other end and quietly build an innings of his own.

When Will departed for 41, the run rate slowed down and as it approached 7 an over, despite a heroic knock of 22 from the injured (groin) Dave Bowers, The Rops looked the more likely winners. Noah and Deano James departed quickly, leaving Bob Lethaby at the crease with Phil.

With strike rotation keeping Phil at the crease as much as possible, the run rate started dropping again and the two vets took control of the innings. It was just a shame Phil didn’t get to hit the match winning runs. That was left to Billy Turner, with a cunning leg side glance that took The Oaks to victory with Bob UNBEATEN ON 10 at the other end.

It was a good game this, and huge credit must go to Billy and Deano who worked tirelessly in the field, stopping fours that would have aided Ropley to victory.

MOM: Phil Carpenter with an excellent 62.