One Win From Four on A Patchy Weekend 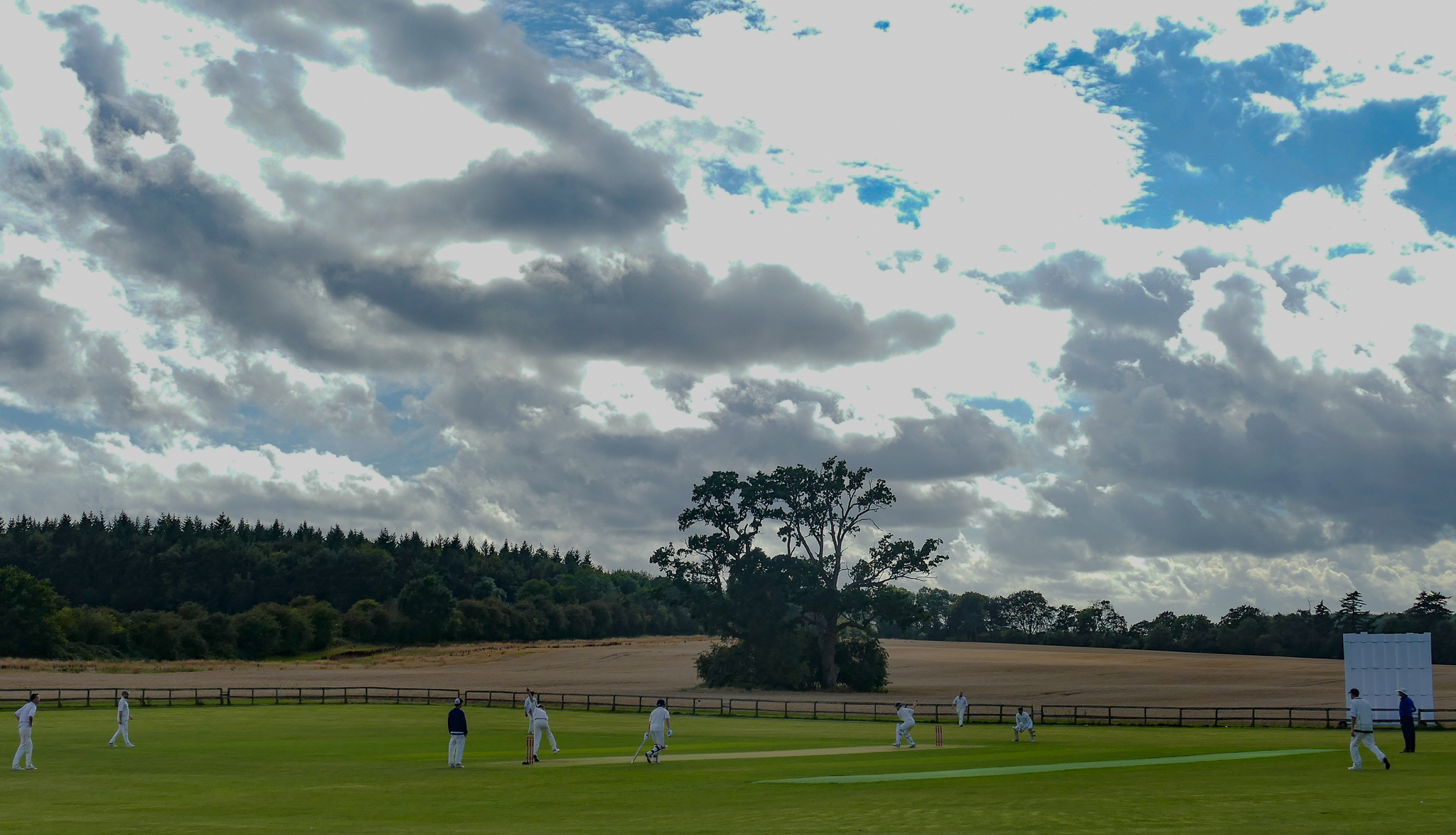 First XI Report from the Chair

The First XI eased past Ashford on a strange kind of afternoon at Oakley Park. In autumnal feeling conditions, Oakley batted first and lost James Bayliss early. Dan Sumner came in and built a steady partnership with Will Cheyney. However, when Will got out for a decent 29, the scorebook took on a binary look as it went 1-0-1-0 at the cost of the middle order.

Batting at eight, Elliot Hennessey (70) got the boys out of a hole, whilst in form Dan Sumner made his way to another impressive ton. Dan is seeing it like a football right now, but the rest of the batting order need to work on doing better. No point dwelling on it as they know it.

Whilst The Oaks are still trying to find a batting line up that works, bowling is no such issue. Dan has a host of options and it was great to see that young Josh Carpenter (2-18 off 8) was the pick of a strong bowling show.

Alex Brundle (4-24) Clive Welsman (2-45) and Tom Barnes (1-26) also bowled well, with Elliot Hennessey removing Williamson, the only Hill player to do any damage with a belligerent half-century.

So, a win that wasn’t as straightforward as it seems but, with East Woodhay suffering defeat at Wherwell, it does leave the door open for Vector cup glory. All we need is for some good batsmen to hit form and work harder on building an innings. Then this will shape up to be a decent side in County Two next year.

A much-changed Oaks headed to East Woodhay nicked named Woody which caused confusion throughout the day for Oakley’s very own Woody.

Oaks won the toss and had a bowl first. Oli Essex and Andrew steamed in first up and

unlucky in the first few overs, but it didn’t take long for Woodhay openers to settle and they started well. Mr Essex was bowling well and got a well-deserved wicket.

In come the number 3 bat who was a classy little fella, started to play shots early and looked like he was going to be there for a long time. On came Tall Jeff with his famous off spin, tall Jeff got his first wicket of the afternoon with an edge to Woody in gully.

This catch by woody was simply fantastic. Diving to his left one hand and it was a miracle he caught it. Sometimes you just must appreciate these moments and the standing ovation from around the ground was well deserved.

Tall Jeff got another wicket while DJ came on with his leg spin. He didn’t bowl too badly and was very unlucky with an LBW. Hugh also bowled some great stuff and looks a very handy cricketer. Oakley didn’t bowl badly and kept Woodhay down to 200 odd and on a batting pitch the oaks were confident they could get close.

Opening the batting was Savage and Tall Jeff and it was a bad start with Jeff going early and Woody getting his weekly duck. In come Bown who got a few runs before getting caught. Savage got a few before getting out and only Will batted well with a nice 40.

DJ and Jack Brundle came and got out without troubling the score book. All though Oli got a few at the end and Hugh looked decent, Oakley’s top order lost them the game and will be doing everything they can to put it right.

Man of the match Will Montgomery for a great knock and also bowling well at the death.

The 3rd XI were grateful to get a fixture this weekend down at Amport. The joys of Social Media found us a well-matched fixture against a second string Amport side who would, like ourselves, be a mixture of Colts making their start in adult cricket and a few older heads just out to enjoy the day.

Oakley won the toss and elected to play to our strengths and have a bowl first.
Things couldn’t have started any better as the Amport opener saw his off-stump cartwheeling from the very first ball of the match as Bowers had steamed in with ferocity.

Unfortunately for the Captain this would be his only moment of joy and the scorecard would later tell that he probably only got to bowl as some sort of “Care in The Community” project.
One wicket down, but a long way from trouble, Amport then let their 1st XI batsmen take charge.
Herbie plugged away tirelessly at the other end delivering some unplayable balls to the big boys but soon learned that anything less than good would be punished harshly. A couple of half chances didn’t go our way but, with the scoreboard ticking over like the speedometer on a Ferrari, there was a glimmer of hope.
Rain.

It looked as though the match was doomed as we left the field for almost an hour.
Determined to let their 1stXI stars have their fun, Amport insisted the rain would pass and the pitch would be fine. They weren’t wrong.

The game was reduced to 35 overs a side and Amport came out swinging.
Tanner bowled well as we toiled in the field against a left-hand right-hand combo. Despite the windy conditions Tanner’s perseverance paid off as Nigel took a good catch.

Avi like an old, wounded war horse tried to dictate terms to the Amport slogger but, like the rest of us, got carted around a bit more than we wanted. However, reward was gained as the ball flew up into the stratosphere only to be snaffled up by Bowers.
There was another breakthrough when the 1st XI bat purposely ran out a Colt just so that he could stay on strike. It probably summed up the type of bloke he was as he showed no remorse.

Reuben was probably the pick of our bowlers. Making his debut in adults cricket the young lad showed confidence well beyond his years. With Mike DeVos toiling at the other end, and fantastic support work in the field from Chippy Phil, Reuben was unlucky not to get a wicket.
We should take some lessons from the game such as being a bit more observant and a touch more supportive.

It was a tough time in the field and on another day, catches would have stuck and run outs would have been dealt with calmly. We trudged off knowing that the target of 256 set mostly by Amport 1stXI was going to be a big ask. An injury late in the 1st innings meant a change in the batting order.
Chippy Phil and Bish opened and things looked good.

Chippy played his usual patient game whilst being supported by the flair and flamboyance of Bish.
There was hope rising amongst the troops as we watched the scoreboard tick along nicely.
But disaster struck when, curiously, Chippy was given out LBW whilst advancing down the wicket and swing to one down leg.

Avi took to the crease and gave up his wicket (probably guilty after edging one) by standing midway up the wicket and admiring the Amport calamity making hard work of running him out.
Coults was up next followed by Mike DeVos. Neither added much to the total but Mike had the bonus of staying out in the middle a bit longer than expected as he acted as a runner for the injured Bowers.

With Bish finding all parts of the ground with ease our lower order didn’t offer him much support, and when he was finally out caught and bowled for 85 the game was up for Oakley. Deano was our big hope, but despite having a great knock only added three runs to the total.

The Hamilton crew put up a spirited fight with Andy knocking 10 and outscoring both his lads.
We managed to get 167 from our 35 overs with both Herbie and Reuben unbeaten at the end.
All in all, it was a long day and we must learn from it. Maybe on another day Amport would have only used their regular players but we can only play with what’s in front of us. Onwards and upwards though, as we look forward to playing Basingstoke XVIII’s next week.

Man of the match: Bish
A top knock and great fielding

Retard of the day: Avi
Let him explain how he got ran out (he had a ringside view of it)

Sunday XI report From The Chair

The Sunday XI hosted The Candovers who, much to our surprise, looked desperate for the win they eventually achieved.

Batting First on a gusty and unpleasant afternoon, The Oaks went with a unique looking line-up featuring Mad Alan and Ian Bennett opening the bat. Both didn’t last long amongst euphoric scenes from The Candovers.

Thereafter, there were plenty of comical scenes amongst the batting line up and tragedy too. Bob Lethaby, having his longest knock of the season, was looking almost like a batsman when, after a controlled innings, he heaved a leg side full toss for six.

The problem is that it didn’t go for six. It went down the throat of the only fielder on the leg side boundary, leaving Bob to fight off both tears and vomit. It was a traumatic moment for the lad, and one he might not recover from.

The one notable innings came from a determined knock by Alex Brundle. Dan Sumner and Simon Dutton both made 15 but a score of 121 was paltry.
Defending the total, The Oaks had a right good go at it without ever being favourites. Sumner, AB and Fawad, all picked up 2 wickets apiece and Rav Kancharla got one. There was a golden moment when the Candovers batsman and annoying wicket keeper played an exquisite leave to the bowling of Sumner. The ball clattered into the stumps and everyone laughed heartily.

In the end The Candovers deserved the win, losing 7 wickets in a good encounter. It could have been eight if Bob had risked another injury courtesy of a ‘catchable’ rasping drive that had ‘four hours in A&E’ written all over it. After injuring himself stopping one drive with his ankle and getting his baby finger to another, cowardice was the sensible option.

Back in the clubhouse, nursing a bruised ankle and finger, Bob reflected on what might have been had his best ever shot cleared the fielder. He then got stung on the buttocks three times by a wasp that had crawled up the leg of his shorts.

It was one of those afternoons.