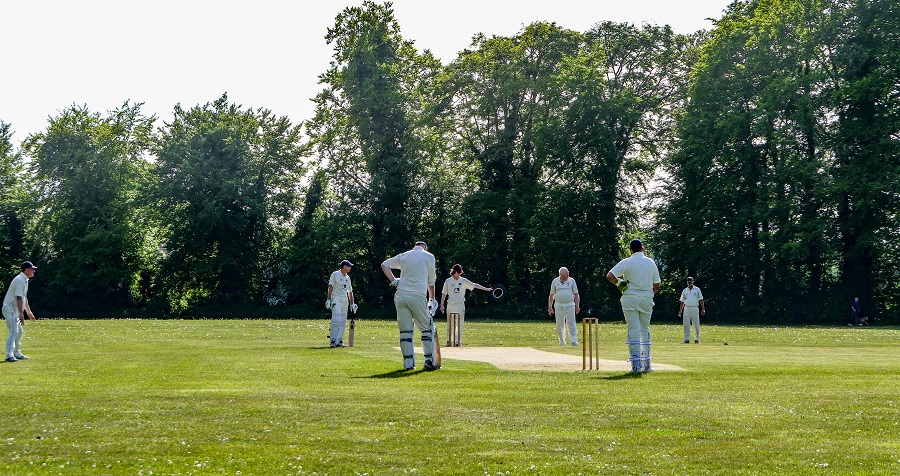 The Third XI were beaten narrowly by Herriard II’s in a mostly friendly, occasionally feisty affair at a sun-kissed Newfound yesterday.

Herriard batted first, and Matt Bennett, cousin of our very own Ian Bennett, set about putting anything short and down leg, into the bushes. Unfortunately, the man to deliver the meat and drink was Ollie Rabley. Ollie is normally a calm and laid-back man who we mere mortals with shorter fuses, look up to.

It is almost annoying that he keeps himself in check so well. This made it all the more satisfying when Ollie exploded with self-loathing as another six landed in a place where there was a high chance of an adder bite. “NOT AGAIN YOU FLIPPING TWITNIT!”, Ollie screamed…or something like that, anyway. Only cricket can reduce a man to such outbursts. It’s an addictive game but it is like an unsuitable and vindictive mistress.

Herbie Hamilton was bowling well at the other end without reward, and it was the introduction of Rav Kancharla that got The Oaks back in the hunt. Ravi picked up the three wickets of decent batsmen, and it was clear The Oaks were back in the contest. Chairman, and last week’s plot loser, Bob Lethaby, replaced Mike ‘Expensive’ De Vos, who was taking the kind of tap that comes to a man who hasn’t bowled since last August. In fairness to Mike, he was only on to replace Avi, whose knee had caved in after one delivery.

Bob at the Double and Ollie’s Redemption

Bob’s spell started with an impressive maiden then two quick wickets. Could this be his big day? Would he be the match-winner, carried from the pitch by his jubilant teammates? No, he wouldn’t, his bowling lost control and he took himself off. The day’s script was written for Ollie, who, after being humbled into a state of personal vitriol, fought back with a memorable five-wicket haul. There were scenes, and they were absolute.

Oakley is a club of 45 senior members but apparently short on players that ‘bat big’. So it is fair to say that The Third XI wasn’t awash with batting talent, meaning 141 was still a formidable target. Still, when you have Chippy Carpenter on your teamsheet, you have hope. Chippy dug in, despite the loss of a youngster, Ryan Parry, for 5.

Mike De Vos came out under Kris’s instructions to ‘have a go’. ‘Have a go’ he did, hitting a flurry of fours in a chaotic innings of 30 that had a passing cat wondering how many lives humans get. Still, it kept The Oaks in the hunt, at least for a while. Just when all was looking rosy in The Oakley Garden, things started going wrong.

Avi with the Language of a Navvie

The top order had done well but Phil was furious for getting out to a dolly on 24 and Kris Tucknott and Ollie Rabley (who hit a lusty six) both departed in the twenties when looking in good nick. Avi’s run-out looked, shall we say, unlucky. He let this be known with the kind of language you might avoid when the local vicar has popped round for a cup of Darjeeling.

The Oaks didn’t really have a tail that might wag, and consecutive golden ducks for Rav and Deano were celebrated as if  Herriard had just removed Joe Root and Ben Stokes. It was all bit odd, but there you go. Bob Lethaby and James Middleton hung on gamely as some tempers frayed, particularly when Bob hit a 4 that was only given as a two. It appeared that one of the Herriard players wanted a fight after the game to sort it out, which again, was a bit strange.

They have a few tough-looking lads do Herriard, but he wasn’t one of them. If it had been Ian’s cousin offering fisticuffs, I would have got on my knees and begged for mercy. However, as is often the case with genuinely big tough blokes, he was a decent guy and was a good laugh throughout the game. The umpire told everyone to shut up and calm down. Bob didn’t react, due to still feeling contrite from the previous week’s hissy fit to rival some of the greats. It may be several weeks before his next one.

Anyway, Bob (6) and James (9) couldn’t quite get Oakley over the line and Herbie was left not out in a 15-run defeat. All was forgotten and both teams sportingly shook hands and laughed off any little heat of the moment flare-ups. The chairman of Herriard is a lovely bloke and like all chairmen, has a lot of characters to deal with, which he does very well.

Ultimately, we would have loved to have won for another Oaks Saturday treble, but…. the Third Team was established to ensure all members get a game of cricket. For that reason, it has been an experiment that continues to be a huge success. As we drove off to watch the First XI complete victory at Oakley Park, a few of us spotted Avi having a blazing row with himself in a phone box.

All in all, it was a good day out in the late spring sunshine that was enjoyed by all…most of it, anyway.